I have recently had the pleasure of working with Power bar to test some new products they are going to launch into the soon. They are a European based company and after meeting with some of there representatives at the cycle show at the NEC I have understood that they want to establish themselves with this product but at current don’t offer a range of flavours that agree with the UK branding and racing community.

The three flavours of the sports product I have tried are blackcurrant, lemon and tonics water. The product has been designed to increase performance both in training and racing, and help you get the most out of every second.

Blackcurrant: This was the best of the three flavours and defiantly my favourite. I found this very easy on the stomach and didn’t get any kick back from drinking it through speed and endurance based training. The product helped my performance during a bike TT interval session allowing me to recover sufficiently during each rest period.

Tonic water: This product had an added caffeine kick, and was defiantly evident when I was training. It gave me the added kick during a long bike TT effort to get the maximal from myself and stay focused and push through the whole effort. The caffeine kick was evident but wasn’t overwhelming in taste. Although the tonic taste wont suit everyone but majority will like it.

Lemon: This taste was actually a very nice taste and performed much like the blackcurrant, the flavour of lemon was suttle and the performance advantages were also very good. I used this when I did a very tough track session and the hydration benefits were very good. I was very impressed with the way that my body reacted to the drink and was able to continue to push through till the end of the session. It was light on the stomach and didn’t give me any after effects.

All in all they were three good products, I am undecided if people will enjoy the tonic flavour, but the lemon and the blackcurrant are defiantly going to be popular with UK customers.
Posted by Unknown at 01:25 No comments:

The past 3 weeks since I posted have included lots of training, advice, pain, recovery, darkness, cold temps, warm temps, puncture, celebrities and a lot more. 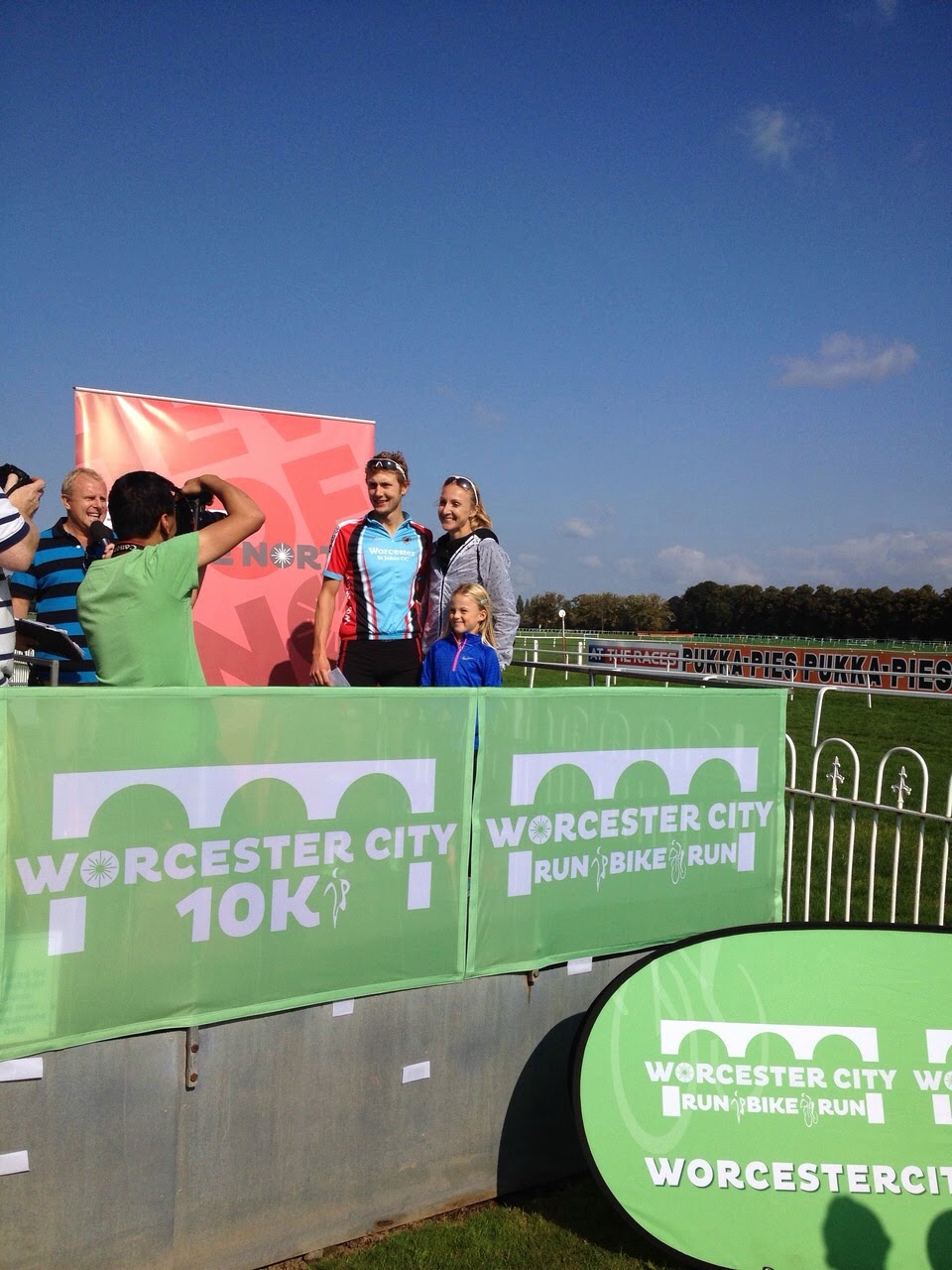 I have been training for around 12 weeks with one major final race at the end of the season in Oct, so have been trying out a new program to see the benefits. I have also now started to race and really aim to sharpen up for the race, I firstly raced the EXTREMELY tough HILLY Forest of dean duathlon. The distances was 11k-44k-5k, the run was a off road trail run and was 2.5k uphill and 2.5k down hill (man alive didnt I feel that in my legs the day after). I was in first place coming into T1 and was really feeling like I was running well, I headed out onto the bike and realised very quickly that a disc was a very very very bad idea for such a hilly course. I was able to make time up coming down hills, but going up was a nightmare going up them. I was winning the race but was tiring fast after 40k on the bike, and then bang!!!! blow out and the end of my race, I rolled into transition and ran the final 5k hard as a training effort, I was happy with just how tough the race was and it wasnt important in the grand scheme of things, but it would have still been nice to win. I have not entered this race three years in a row and something has gone wrong eveyr year, 1st I got lost due to having my head down after being in 1st place, 2nd I broke down on the way to the race and wasnt able to get there until 10mins before and the race blew my socks of and out me into alot of pain, and the puncture this year just adds more salt to the wound. Next year I will win! 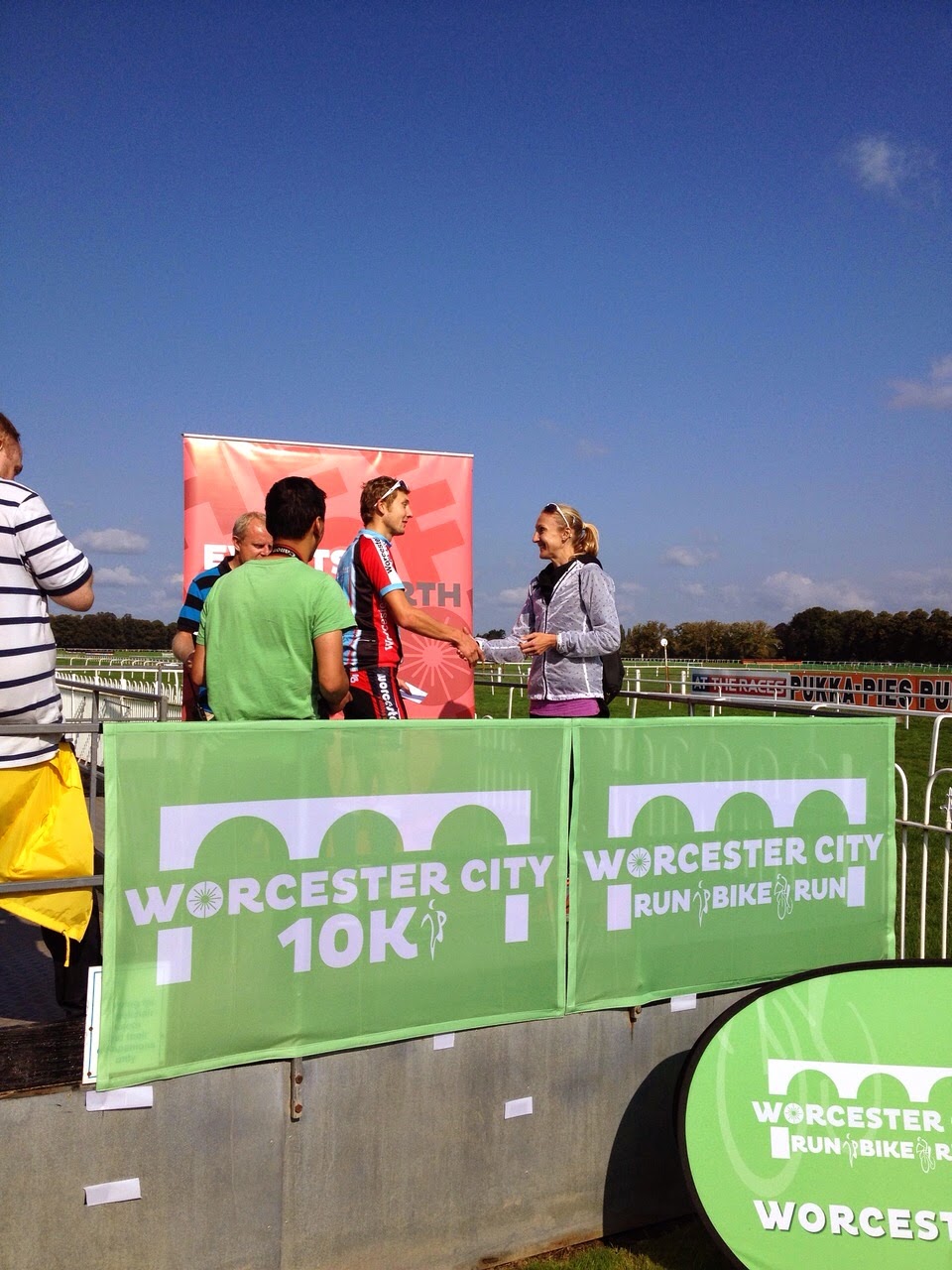 After the Forest of dean duathlon I was very tired, and felt horrible all week. I wasn't able to open up at all and just ticked along with a few easy session to start the week and then tried some small efforts later on in the week as I knew the Worcester run bike run race would be  tough race, my feelings were,take it easy, race hard and recovery the week after.

The race started off fast as it was actually a 10k race (that yes included Paula Radcliffe), I strangely felt a lot better than I though I would and was able to sustain a decent pace, and in hind sight probably could have gone harder, I was able to keep the leaders in sight all the way  through to the finish of the 10k. I was also able to pass Paula t around 8k which was a nice confidence boost. I went into T1 in 3rd place, and actually after a bit of a calamitous T1 from Ben Price (the eventual winner) I was able to make up alot of group and leave with him, The bike route was literally a joke, having to cycle past spectators on an open foot bridge, dismount and run up hill and down on the way back. Lets just say it wasnt fun and I pray that no one has to ride that same route again. I came into T2 in 3rd and was very happy with that knowing I ran well for the 10k I was thinking I would be able to do so for the 5k. I set out fast and with the way the 5k was set up I would see 1st and second the whole way, they were a little to far to catch but I still wanted to try and get some time back so I went hard. I was able to stay on course but lost the leaders, they had actually taken a wrong tern at around 4k they appeared on the wrong side of the route, if it were not for 1st place knowing me and shouting my name I would have ran into win! But I actually got them back onto the route, let them cross the line in front and settled for 3rd! Still very happy! 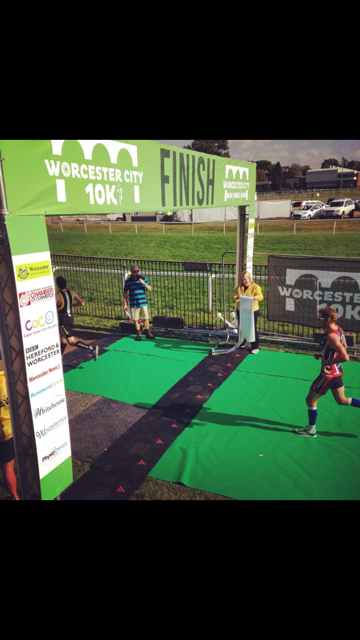 Letting 1st and 2nd past on the way to third. Might be a little to kind in some peoples eyes, but hopefully it will maybe happen in the future to me and someone else will have the kindness to also let me back in front. 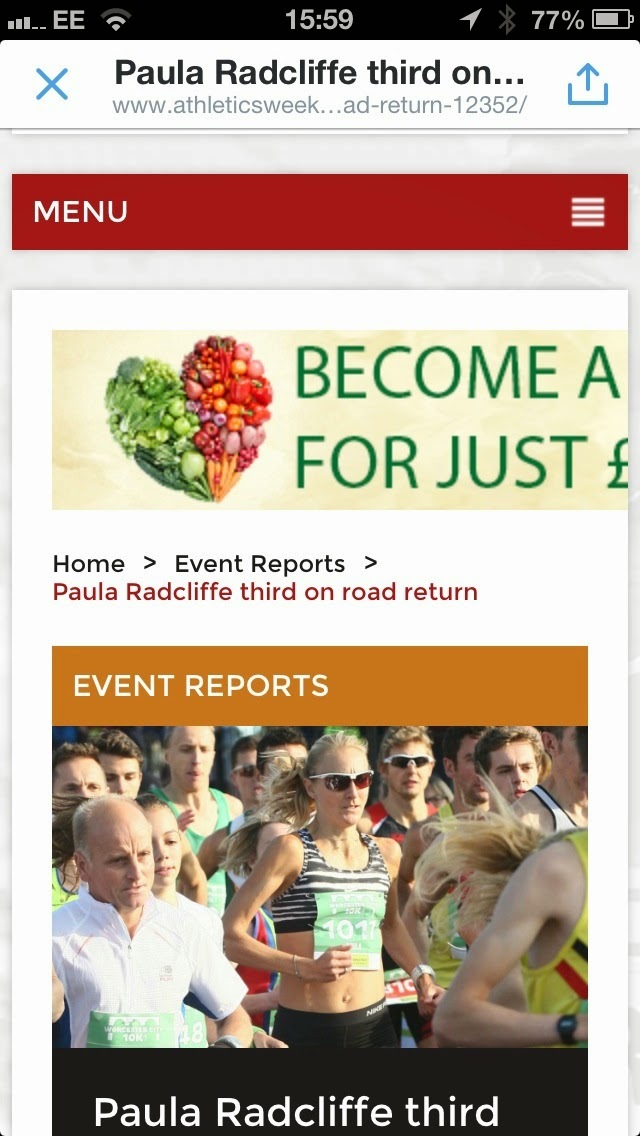 I now continue to build towards the British Championship in October, I need to improve my run to bike strength and then I will hopefully enjoy a good race. I have been training hard and have received lot of great advice and hopefully this will all pay off!

Now being back at work sucks.....yep I love my job but it still sucks. Less time and less energy!

So to cut down on time in the AM and to extend training sessions I have not needed to invent breakfast on the go, and have come up with this.


It only really works with pea or soy protein (gluten free), I haven't tried it with normal protein but think it would work, You have it mix up the protein in the shaker and make sure that it is thick, almost the consistence of yogurt. Once you have done that all you do is add it all to a mixing bowl, stir till the consistency is sticky enough to mold into a simple shape and then bake for 8-10 mins at 150, turn oven off and turn them over. Then let them cool naturally and bake a little more and then they are ready to go. They will last about 3-4 days. 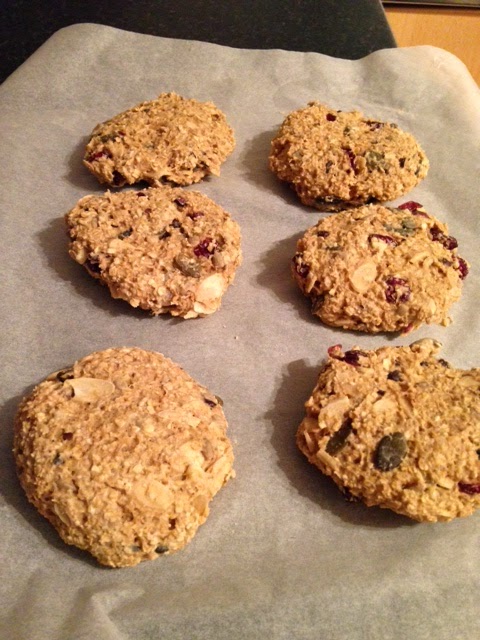 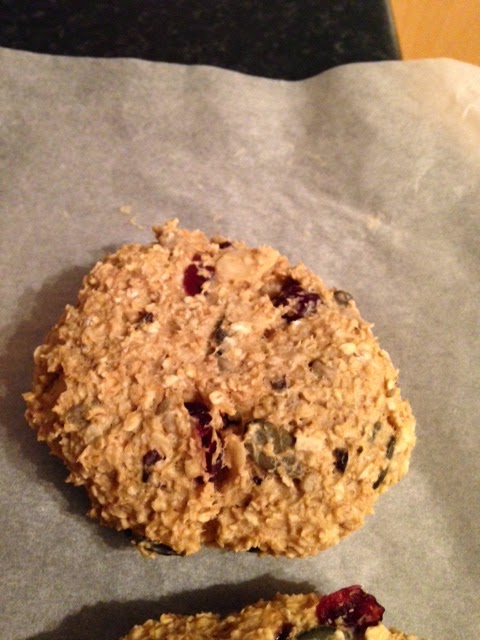 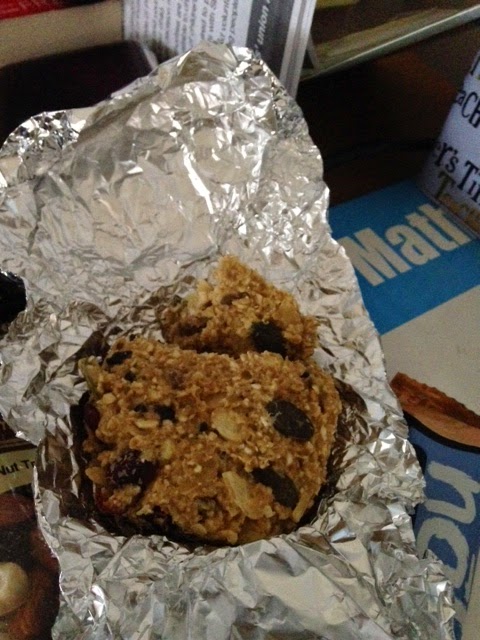 100g Nuts chopped (preference to the maker), I used almonds.

(I also added coca nibs for flavor, but you can add anything really, coco powder would be really good for a chocolate hit).